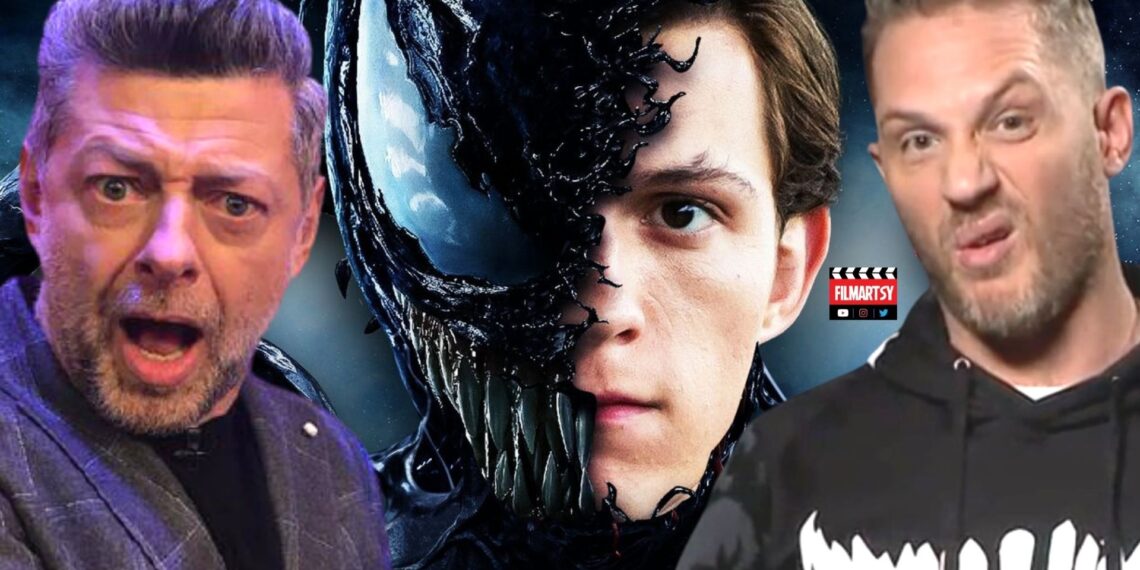 Tom Hardy’s trailer is stationed in the carpark of a film studio on the outskirts of Cardiff. It’s one of the flashier kind, with a kitchenette and seated area and some other rooms at the back I don’t see which presumably contain a toilet and a bed or, I don’t know, chaise longue. The seated area has a wipe-clean, upholstered bench down one side, which I’m sitting on, and a white leatherette armchair in the opposite corner which, it must be said, has the slight quality of a throne. There are letterbox windows high up on either side, a flat screen TV on the wall, and a strange mirrored panel in the ceiling. There is a bag of sweets on the table by the chair, and some bumper packs of chewing gum, and no other notable items to report besides a dog bed and two dog bowls on the floor, which have a blingy, coppery finish that draws the eye.

It’s the kind of trailer — and they are the kind of dog bowls — you’d hope would be made available to one of our most beloved actors who, in a poll earlier this year, was voted the number one “male British film star of the 21st century”. However, there is one thing that is conspicuously lacking from Tom Hardy’s trailer and that is Tom Hardy.

Instead, the armchair is occupied by his assistant, Natalie, an elegant blonde who carries her phone on a cord around her neck and checks it sporadically. It was Natalie who met me at the station, along with Hardy’s driver and security guard Luke, who is young and chatty and has trained in both boxing and Krav Maga. Natalie can also handle herself, one suspects; before becoming Hardy’s assistant, around the time he played both Ronnie and Reggie Kray in the 2015 film Legend, she worked for more than a decade with Liam Gallagher. But though I glean this from a very enjoyable chat we have in Tom Hardy’s trailer while we wait for Tom Hardy, she’s not the one who signed up for an interview so I will, as Ronnie Kray might say, leave her out of it.

As it happened, I’d been waiting for a few weeks for a summons from Hardy to an unspecified destination — maybe London! Maybe Wales! Maybe, God forbid, on Zoom! — so another hour here or there was no big deal. Having interviewed him a few times before, I knew time-keeping not to be his strongest suit.

I’d also learned not to second-guess the setting: the first time, when he was shooting The Revenant for director Alejandro Iñárritu and promoting George Miller’s Mad Max: Fury Road, we painted ceramics in a Calgary strip mall. Another time, when he was preparing to launch his debut superhero movie Venom, we pottered around the Richmond-upon-Thames branch of Homebase. He likes to keep you on your toes. related storyAt Home(base) With Tom Hardy

Even in the car with Natalie and Luke, driving past clapped-out industrial buildings and a surprising number of horses — owned, Luke informed me, by a local Traveller community who keep them tethered at the roadside — I knew nothing of what would be happening, other than that I had taken a train to Cardiff because Hardy was somewhere nearby filming a movie called Havoc: an action film for Netflix about a “bruised detective” pulled into the criminal underworld while on the hunt for a politician’s wayward son. I knew they were taking me to the studio for a Covid test, but it wasn’t until we were back outside in the carpark, mounting the little steps to the door of a trailer bearing a sign that said “Walker”, his character’s name, that I realised this was to be our final destination. So obvious! And therefore so unexpected! It made a strange sort of sense. And it was still, after all, a glorified shipping container in a carpark. “‘Glamour,’ they said,” I hear Natalie deadpan, more than once. Also more than once: “Tom’s on his way.”