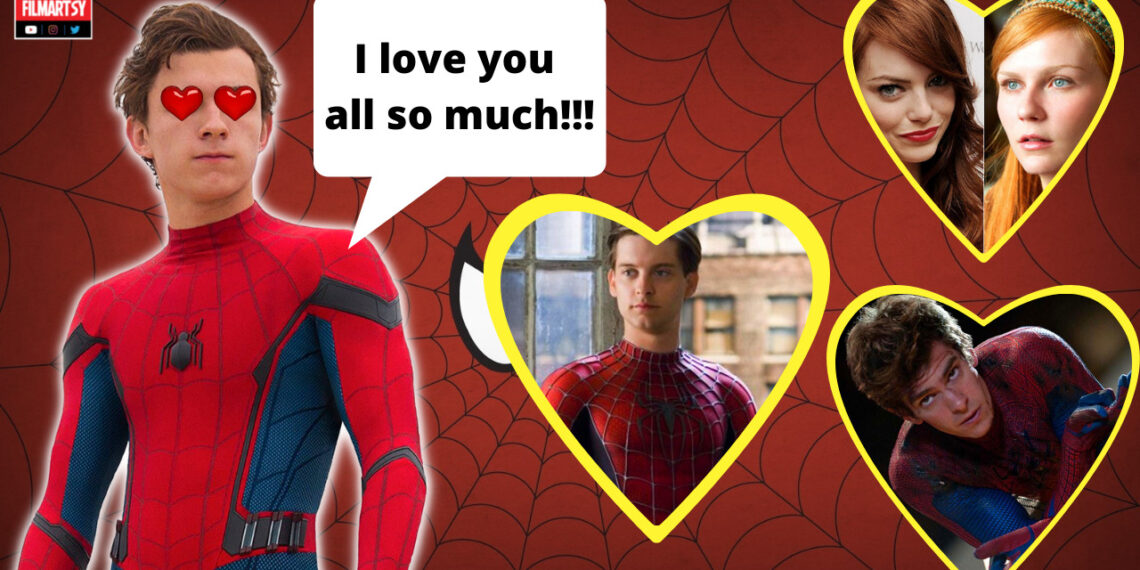 Can December come quicker? On the other hand, Sony could relieve all of us of this unrest by confirming the best-kept secret in cinema history. Will Andrew Garfield and Tobey Maguire return as Spider-Man in the upcoming Spider-Man No Way Home film? Unfortunately, this blog won’t answer that ponderment, which means you’ll just have to wait. Wait! Don’t click away just yet. If you love Spider-Man, especially the older films, you’re in good company! Tom Holland recently gushed over Tobey Maguire, Andrew Garfield, Emma Stone, Kristen Dunst, and all 5 Spider-Man films. Here’s a recap of what he said.

Tom Holland Will Be Facing His Favorite Villian

During this interview, Co-star Jacob Batalon and Tom Holland ask who their favorite Spider-Man villain is? While Jacob sided with Dafoe’s Green Goblin, Tom settled on the iconic foe in the 2nd Ramey film. The infamous Doc Oc played by Alfred Molina. Tom Holland loves the fight choreography between the tentacle menace and the agile neighborhood Spider-Man. Interestingly enough, Tom Holland will get to take on his favorite villain in the upcoming Spider-Man No Way Home movie.

The synergy between all the Spider-Man franchises is something to behold. About a year ago, Sony and Marvel’s relationship looked irreparable, and we thought it was the last of Tom Holland in the MCU. Aside from our Tobey & Andrew questions, there are rumors that Tom Holland’s Spider-Man will be crossing over to the Sony universe to team up with Tom Hardy’s Venom. During this interview, Tom explains that he’s blessed when it comes to Spider-Man. He has five films and two excellent portrayals to look over and draw inspiration. It worked because Tom Holland is an MCU favorite amongst the vast fanbase.

As we await the final dangling carrot, let’s be thankful for all the Spider-Man amazingness we have. In this industry, this cooperation is a rare relationship to cultivate in Hollywood, but it may be the difference maker. The trailer alone got 100 million more views in 24 hours than Avengers Endgame. Spider-Man No Way Home is shaping up to be one of the biggest box office hits of all time.