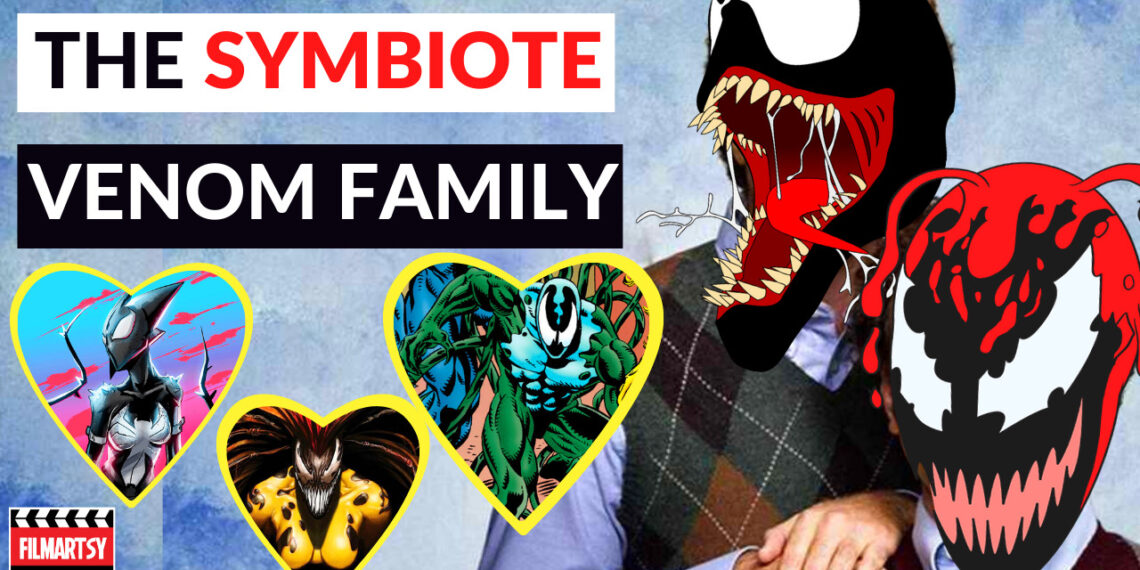 They’re slimy, sticky, icky, and downright tricky. They are the Venom Symbiote Family! *snap snap* All jokes aside, the symbiote family tree holds a dastardly crew of alien empowered villains. Some of Marvel’s messiest and cruelest moments are the result of alien gloop. Since the inception of Marvel comics, symbiote characters have joined the fray culminating in a lengthy list. Here’s our top list of symbiotes from the Marvel universe.

Venom is the certified original goat of the symbiote family tree. Dating back to 1984, Venom has plagued the friendly neighbor web-slinger for decades. His abilities include super-strength, healing powers, stamina, speed, witty humor, and “turd in the wind” jokes.

Finally, Case Kasady and his visceral alter ego Carnage hit the big screen this year. Carnage is one of Marvel’s most violent and eerie villains. Everywhere he goes, a pool of blood will assuredly follow. The main distinction between him and Venom is his symbiosis is on a molecular level.

Ever wondered where the symbiotes originated? Knull is the answer to that question. During his universal tyranny, he forged the All-Black sword made entirely of the symbiote. Later, he crafted a full suit of armor made of the symbiote. The rest is history.

Think the exact opposite of Venom in every way, and you’ll have an accurate picture of Anti-Venom. The Anti-Venom is a hybrid symbiote that can cure diseases and corrode symbiotes. Also, the Anti-Venom looks freaking dope.

This hunky lug was a nobody before the first Venom film. Sony Pictures chose Riot for a reason unbeknownst to us, but we’re glad he’s somebody now. Despite his movie origin, He’s technically an offspring from Venom like his other siblings. His abilities are similar to Venom’s except, he can make weapons with his hands.

These are the aforementioned Venom offspring who terrorize many in the Marvel Universe. Each has its unique ability and backstory. The experiments were done by the Life Foundation by using Venom’s DNA.

I encourage anyone reading this to go pick up those comics and read them. Scream’s story is particularly moving, and the others have interesting stories as well.

Venom 2 Behind The Scenes Funny Moments And Bloopers